Under the motto “Towards a new economy”, the Uruguay Circular Award, 4th edition, on 17 November, recognized projects ranging from large companies to educational institutions. A total of 54 projects were presented in the competition. The Uruguay Circular Award is an initiative of PAGE Uruguay, MIEM, ANDE, ANII and UNIDO, which aims to promote projects of companies, enterprises, cooperatives and other associations, communities and educational institutions in field of circular economy.

Walter Verri highlighted the importance of the circular economy and announced that the award will continue. He also stressed the importance of the award bringing together not only young people, but also “Uruguay’s leading large companies, which drive production”. “Today there are companies here that are leaders in their export sectors, and yet they are betting on the circular economy,” he added.

This year, all winners received a statuette of recognition. The Large Companies and MSMEs categories received a promotional film that reflects their work in circular economy; while the winner of the Science Clubs category participated in the ANDE “Entrepreneurial Space” fair held on November 18 and 19. The winner of the Education Institutions category will receive advice to the development of a prototype, which consists of a reduced version of a new or significantly improved product, service or process, aligned with circular economy strategies. 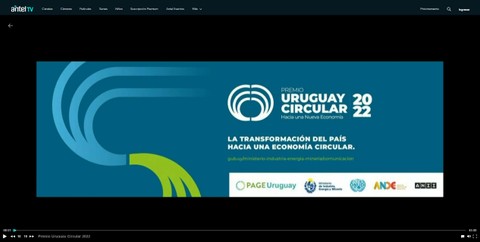